This is the most  beautiful computer game,  you will ever play. Layman's Gnosis

Quick rules of the game.

1  Learn the  hand trick, with the soft body field patting, from the website tour, starting on the  left index
BEGINNERS  Practice the handtrick  daily.

2   A kind person  might have shown you the hand trick, already.
The tour  from BEGINNERS will show you more. You need  computer sound.

LAY means ordinary person. And GNOSIS  means knowing yourself completely
3    But if not, you can learn the handtrick from three  LAY GNOSIS videos ( 1, 2 and 3) on Youtube
4  Practising the Hnadtrick daily, causes, after  1or 2  weeks, vivid dreams.Write them down.
Keep a notebook beside the bed. Describe the dream in 3 sentences.
5  One dream, will be your favourite person like a movie star  or comic book character  showing  geat
affection to you.

6   Another dream will be  exciting, that of an aeroplane putting its wheels up, and soaring off  into the
blue sky. Whoosh !

7 Yet a nother dream is likely to be, that  of a big  Movie being made.You can see cameras and lights, and Directors and Producers and YOU are the STAR of the movie. They are waiting for YOU ! To film the story of YOUR life.
8 These dreams, will cause you to ask many questions. And your questions will be answered in later  dreams. Write them down. 3 sentences.
9  Ask  a question a day, for a dream per night  You can write your  daily question.
10 Do this for a few weeks and months. Realise the second intelligence within yourself, is providing the dreams. Revealing itself to you. Slowly. Very kindly. It doesn't want to offend you.
11 Now the fun begins. You ask the seond intelligence within you, by just thinking to yourself, to insert a night dream into someone else's head. Someone close to you. That you see every morning. Write down an unusual colourful dream  (see below for example blue box ). Keep it a secret. Do not speak it .  The other person  is likely to report to you in the morning, a day or two later, that very colourful dream you wrote. It is  important you do not help the person to remember the dream. Just listen. Write it down And do it  all again. And again.  And again. Keep it your secret.
12

Sending dreams to others

It happened!!! First I wanted my husband to dream about birds and the next night he had a dream that he had a tatoo of a bird. So I tried it again last night. Before I went to bed I did the hand tricks and I focused on sending him a dream. I wanted him to dream about a peacock and I wanted it to stand out. So this morning when my husband woke up he said to me that he had a weird dream. He had a dream about a peacock. Then he said it really stood out because it was huge and it was standing in front of him with it's wings spread out and it was protecting him!
Freaky!!!
Talk to you soon,
Peace and Love,
Marie

JOSH
i cant believe you wrote about an airplane
a couple of nights ago i actually had a dream, and in that dream was an airplane hovering in midair, folding up its landing gear, and then it flew off at a super accelerated rate.


JOSH Writes
it is just amazing to me that you spoke of this, with no prior knowledge of my dream, that to me is the slap in the face i have been waiting for.

wow as soon as i read that, i had such an incomprehesable feeling that overwhelmed me.

That is the beginning of the game children. You can tell me your  dream adventures by email. 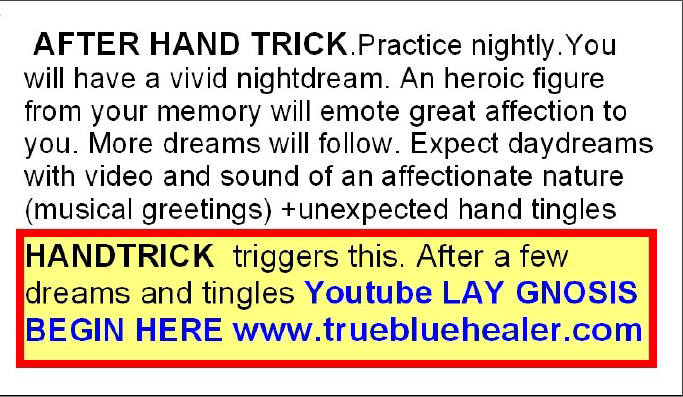 Message  Card text, for  copying and  pasting. Black  and white will do.

AFTER HAND TRICK.  Practice each nght. You will have a vivid night dream. An heroic figure, from your memory, will emote great affection to you.
More dreams will follow. Expect day dreams with video, and sound, of an affectionate nature ( greeting music) + unexpected hand tingles.
Hand trick triggers this. After a few dreams and tingles visit LAY GNOSIS BEGIN HERE on Youtube and truebluehealer.com