This second session Friday the 11th February 2011, the medium was Tom again, the scotsman from Mont Cabriol who unexpectedly demonstrated his speciality transfiguration mediumship.

Venue was the same dark blue painted room on the Wallacia hobby farm etc.
25 people turned up, heat was a problem, no aircon yet.
Emphasis on vegetarian food was made by the food provider Inge. Farmer´s wife.
Later  that was mentioned by a spirit when asked how to become a medium.
Now a bit on the lights generated by the spirits during the  2hr seance.
Recall the furniture in this photo. 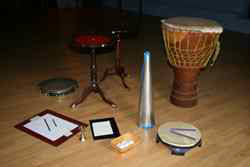 You will notice the little phone table has little beads on it. They appear to contain that well known phosperescence liquid that responds to shaking and lights up. So also the horn has these hollow beads of liquid that light up when shaken. I do recall this being a plaything at parties and also recall the the gene for producing natural luminscence was isolated from deep sea bacteria and was installed in  those luminous monkeys many years go.
I also did see that before the session a person was shining a small torch on the luminous beads on the horn, (blue tape) and the phone table and they retained a slight glow afterward. Seems they were being warmed up for the session.
Notice also there is a little bell often rung  in sessions and a couple of drums and a tambourine.

Something unusual happened this time. Tom the medium  came in wearing a  full  sleeved woolly jumper and Kevin explained this had been asked for by the spirits in advance.
Strange at 35 degrees we all thought.
Usual procedure Tom got into his chair in the curtained cubicle, which was open, he was plastic strapped down ,wrists and feet, straps over the woolly jumper wrists,  and another person came forward to check the straps were in place.
Tom was completely in the cubicle his chair and all.
I was very lucky because I had secured a seat in the second row from the front this time.
Prayer began the session and the Hymn Abide with me.

The low level  squeaky voice bagan and it was obvious the voice was not coming from Tom. It was emanating from about 1 meter to his right. This has been witnessed by others while it's actually happening, from close up.
My close vantage enabled me to verify this. I am only 1.5metres from Tom in his trance, eyes closed in total darkness now.
The explanation is that spirits produce a virtual voice box close to Tom
A number of spirits use the same voice box.
Greetings and stuff come thru and the spirit asks for questions- a few ensue.
Spirit chats with other mediums in the audience like they know each other.

A question is then asked about  how to become a medium and the spirit explains how it helps to be vegetarian and do meditation.

In the dark  I recognised the voice of the questioner, someone I had just  conversed with at length, who had just attended a seance with the world's greatest physical medium David Thompson at Roseville. Sydney Suburb.
The questioner had described to me how in David Thomson's physical medium seance a large black woman with a southern accent materialised out of the ectoplasm from David exclaiming she doesn't do this very much because she is so large and requires lots of ectoplasm. She did lots of jokes and kept asking  where are  all the single men in the audience ? And men reported having her boobs thrust into their faces. She was full of jokes and laughter.
The questioner, I never got his name,  reported to me,  he was transfixed by his  recent David Thompson experience and he was in the process of re-evaluating everthing  he believed.
So he turned up at this session with Tom to learn more and reported he was going to a mediumship training circle.

And in that same vein some men reported having their faces and legs stroked during this Tom session.
The chatter wasn't much chop at the beginning but the spirit did produce a spectacular whirling lights display. This  is done by  the spirit twhirling some of the toys about with the luminous beads which glow when whizzed about to music.
The first voice was softly spoken just like some people are.
Irene is always the loudest most animated clearest speaker like some people you meet. Says whatever comes to mind. Extrovert. She also produces the best light displays and does the most noise making with the instruments tambourine, drums etc.
Now the skeptic might say maybe somebody is wearing black and playing those instruments to fool everybody.
WRONG.
A pair of multicoured rainbow patterned luminous drum sticks appeared, used by Irene to drum very loudly on the hard floor, 1 meter from me in full view.  Astonished I was. So loud it was heard by everybody in the room as discordant with the music- and coming from a different source- not the music speakers.
And one of the luminous tipped horns was flung up the middle aisle and remained there till the end of the session.

And most humourously while Irene was vigorously twirling the illuminated phone table so close to the front row  a man there broke his plastic chair leaning back to avoid being hit. He remained sitting in his demolished chair for the rest of the session. Unperturbed Irene  carried on creating her merry ruckus.

Unexpectedly Irene asked for the medium to be checked to ensure he was still  strapped in.
The curtain was opened and he was sitting there bare chested eyes closed still in trance. His long sleeved  woolly jumper gone. But he was still strapped in strangely. Hands and feet.
A woman later told me his woolly jumper hit her in the face in the audience.

So there were a number of flying objects in this session so far.

Irene then asked for the curtains to be drawn momentarily and some loud music commenced of a totally different nature. Could only be called native American shamanic music with heavy drum beats and bone flutes and whistles and rattles and  shamanic chants and stuff. 3 whole tracks of that at high volume.

Now the curtain had been opened again and a dim tripod  light placed on the floor illuminating Tom's face. He was still in trance, impassive face, eyes closed as the shamanic drums kept thumping. And then it began. The transfiguration of his face. His round face was morphing out of shape quite visibly to form other faces, to the beat of the music. The faces ranged from some obvious native american faces, thru at least one Mainland Indian face, thru some oriental faces larger and smaller than Tom's face. Thin goatee beards appeared and disappeared several times. Likewise thin moustaches appeared and disappeared a few times on some of the faces. Did not see any female faces.Afterward some people reported they recognised  some of  the  morphing faces as the native American spirit guides depicted on the wall pictures outside.

A feature of the faces was none were pretty or handsome. They looked aged and weather beaten. Some had large prominent eyebrows.  Tom's visible left ear was changing shape repeatedly larger and smaller with each face. Faces morphed from round to elongated and back.
Must have seen 20 or 30 faces for about 10 minutes. (3 music tracks)
All done while he is bare chested.

The closest you have seen to this is the popular  Michael Jackson Black and White song where beautiful faces are morphed into each other using trick photography.

Tom's ectoplasmic  face morphing  was done live without cameras with 25 people awestruck. One keeps asking oneself Am I really seeing this?  Should I believe my eyes? To which Source answers "Yes you are  seeing this--its real !"

This can't be disputed. It's been checked by scientists.

Dazzling is this display of face morphing, faces larger and smaller than Tom's all accomodated.

This was a most thrilling display of transfiguration mediumship by  Tom
This is his speciality.

Then the curtain was closed again and Irene took some more questions and did some chatting and suddenly mentioned myself by name, Steve the only person in the room wearing a cap. A black one at that in a totally dark room. Which raises the question how does a spirit "see" in total darkness?

The spiri ts then closed the session and a dim corner light was put on and to our utter surprise Tom, still strapped to his chair, still in trance, had been moved 1.5 metres  forward out of the curtained cubicle onto the floor area directly in front of  the first row of seats. He is gently awakened by  Kevin. Slowly awakens with a look of mystery on his face  to a round of spontaneous applause.

And the luminous tipped horn was still there behind me up the centre aisle because I checked. Irene's joyful work.

And I have now talked to a few people involved in this medium stuff and they have never heard of gnosis so I told them about TBH and how it beats talking to dead people. LOL. Met one lady who had endured an NDE  with anaphylactic shock and she was working her way thru layers of spirit guides. Parasites they mostly are or likely Source wearing funny hats. LOL