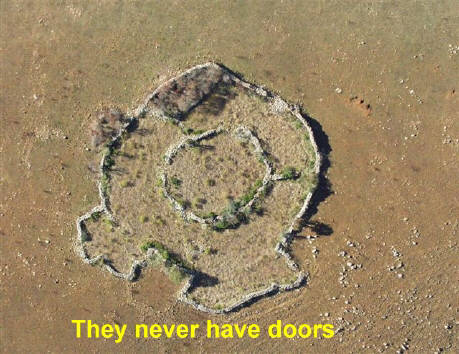 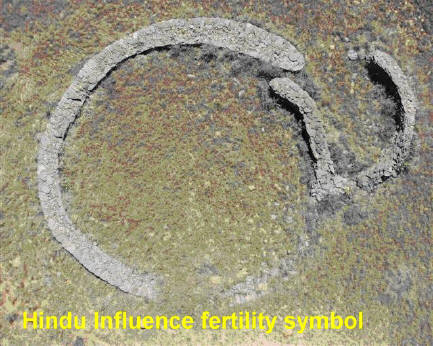 These strange stone structures in their thousands cover a large portion of South Africa.Thousands of them.  Specifically over areas where GOLD was mined in stoneage times. This area is still gold mined today. You might pause to wonder why stone age people would ever mine for gold. It is of no life ease whatsoever to stoneage people .These  circles were largely ignored, dismissed by modern archaeologists as simple tribal constructions a few hundred years ago by the Umboko tribe or something. One reason for their  mainstream science dismissal  is only a few were known. Big Yawn from science.

Michael Tellinger a pilot crisscrossing Africa had noticed many of these strange stone enclosures dotted all over the landscape and did much wondering.
Landing to rescue a crashed fellow pilot he came across something unusual  on a rocky headland. Flat boulders placed securely and carefully  on their edges to enable the solstice, sunrise and sunsets to be accurately spotted. Even alignments with constellation ORION some 3 precessions ago.
75,000 years maybe. So who did that?

How could they know all this? Pilots spend much of their time flying along compass bearings and are routinely familiar with sunrise-sunset bearings etc which change with the time of the year.Knowledge of constellations goes with the job for night flying.Their lives depend on it.

The  deliberate stone lay out was named Adams Calendar.

Other  qualified people have concurred visiting the site.

Tellinger then makes what seems to be a hopeful connection that the many stone ring constructions numbering thousands, were done by the same people who made this Adams Calendar. He made this connection because he is a student of the Annunaki, Nephilim stories of Zacharia Sitchin. Taken from Sumerian tablets 4000yrs old.One part of the tablet story says the Annunaki created a race of slave labourers to dig out gold which they prized. Gold is in SA in vast quantities still. Its mined today and was in very ancient times. So Tellinger suggests that the great population of slave gold miners worked in SA and likely made those many strange stone circular structures pictured.
They are verifiable on Google Earth  which now reveals there  may be tens of thousands of these mysterious structures.
Oddly they have no doors, no entrances. Apparently not made for living in.

There is evidence of stacked stone walls in laneways once connecting these stone rings.
But they werent roads or walkways.

So their purpose remains puzzling. Vast amount of work to construct so many of them. For no apparent domestic use.
And the  wall stones are not locally available. They are brought from somewhere else.

Its hard to date stone, but when it breaks off clean, and fresh stone is exposed, an ageing weathering process begins which deposits a predictable thickness of Patina on the broken surface, enabling rough estimates to be made. Very great ages have been attributed to some broken rocks in these stone rings and Adams calendar. Big numbers like 160,000 years. Even more.

I will  present a few of his videos, they are mercifully short.A few google snapshots.
And a giveway first chapter of his new ebook
We forgive him  for exaggerating numbers.And making some  maybe rash conclusions.
Layman though he is, he is certainly pointing out anomalies of earth history.Many of which we can verify thanks to google and the NET.

I was asked to show this stuff to the gang.

I am told he is nudged, likely without realising. He has just discovered RV.

So I am just following orders-- presenting him to back up Wilcock and Klaus Dona.

He talks about our strange obsession with gold being irrational. It seemed that way to myself as  jeweller robbed twice at gunpoint. I do know many people have an irrational undeserved excitement about gold. Its just a near useless yellow metal.
But we can bear in mind many birds collect metallic shiny objects in their nests. Aquarium fish are also excited by shiny metallic things  excited by their own reflections just like budgerigars.
So is our gold thing entirely irrational and only in humans?
Perhaps the Annunaki only boosted our fascination to mimic theirs.
Fascinating theory that.
Michael Tellinger has also found what appear to be stone tools of unusal composition and  acoustic properties. They ring like a bell. Video here. He remarks the stone tools are so impossible to chip or chisel that they appear to be moulded as if they have been liquefied first.
Same conclusion I pondered when watching Klaus Dona describing intricately made instruments in a strange stone Lydite.
What if ancient people knew how to liquify or jellify rocks somehow to enable moulding?

Example OXALIC ACID from rhubarb plant softens rock making it easily chiselled. Traces of that acid have been found in ancient Maya and Inca monuments. Only problem is Rhubarb doesnt grow in South America.
Lost knowledge example. Romans used concrete. It even set underwater. They never wrote the formula down.
The secret of making concrete was lost till 1870 when it was rediscovered!

So off we go watching a few Michael Tellinger videos mercifully short but informative and thought provoking. He is also connecting to Credo Mutwah and Quotes the Galactic Superwaves of Gnostic astrophysicist Dr Paul La Violette