I have always avoided Zacharia Sitchin's theories as I considered them just too crackpot, too similar to the scientology peak myth.
Thus I experienced a severe foreboding as Michael Tellinger revealed Sitchins Annunaki theory was a major contributor to his inspirations. Thus I wrote "hopeful connections" and "alleged" on his page. Grateful I am for Michael Tellinger showing us in his wonderful Ebook spectacular, Temples of the African Gods, real physical evidence of major civilisation activity that can be checked on Google by anyone.
So it seems in logical thinking, Sitchin, an inspiration to many, is just a  lucky lily pad on the way to a firmer conclusion here. Certainly in Tellingers case.

But not for millions of his readers, that he has led up the garden path.

It turns out most of the key words in the Annunaki story don't exist in the Sumerian tablets.
Like Nibiru 3600yr orbit  etc. Not anywhere according to serious scholars.
And the keystone of Sitchins gripping epic is tablet 243 shown below left. Scholars say Sitchin has completely musinderstood this. They go to great lengths to point out the  much vaunted 'solar system' image is something more innocent. Scholars supply sound reasons. Including that Sumerian scribes worked to clear glyph conventions that are easily established if one reads a few dozen tablets say the scholars. Already well established by peer review and not in doubt. Sitchins  faulty assertions would never have passed peer review, they say.This massive error reveals Sitchin has not studied even a few dozen tablets. Never read the text next to the pictures. Never consulted with serious scholars.When asked why his interpretations differ so greatly from  multilingual Sumerian dictionaries made by mesopotamian scribes he expresses surprise. He didn't know such dictionaries existed. So Sitchin is a sort of  dishonest science fiction writer.

Sitchin fiction
At right we have a scholarly demolition of Sitchin by an international archaeologist author and lecturer Mr Jonathan Gray  PDF Download
And the consulting Scholar is Dr Michael Heiser, much quoted has his own website sitchiniswrong . Its here.
Sitchin is wrong
Sitchin's Rockerfeller Connection 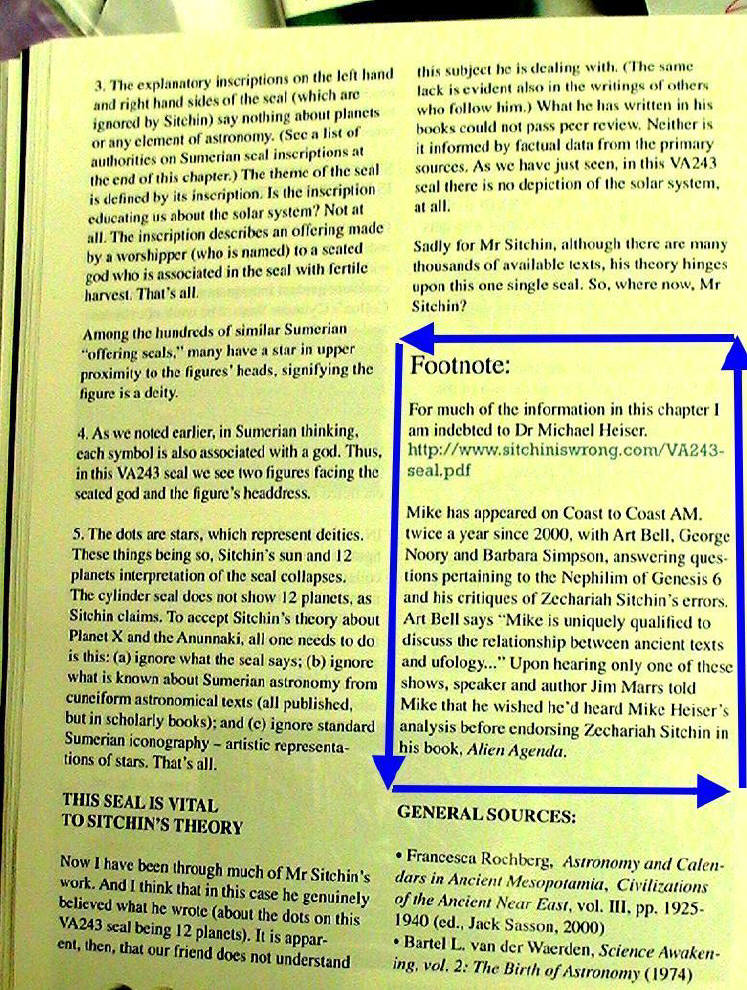