Michio KaKu  on Teleportation- Is this gradual disclosure? Little leaks preparing us?
And what about this little disclosure? Dornier aircraft flying 1945 and seen all over the US and ridiculed 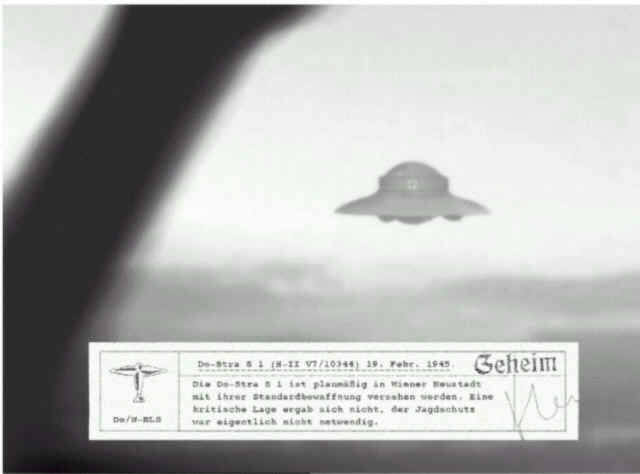 The photo label reads
"The Dornier has been equipped in Wiener (Vienna) Neustadt with its standard weaponry. The situation didn't turn out to be critical, fighter cover didn't actually prove to be necessary."

This picture came from
some photos of CIA
black ops aircraft and stuff.

The US government was so impressed by the  wartime success of propaganda mis and disinformation they were determined not to lose that skill in peace time.So they decided to practice  psych war games on their own population. It was vital to have  a government  owned and  controlled TV network so the CIA simply bought one in 1947. Has owned it ever since. To steer public opinon away from facts and reality and to plant ideas in people's heads conducive to their obedience and  government staying  in power.

CIA was set up by Project Paper clip  Nazis such as Rheinhard Gehlen, former head of the  German Intelligence, Heinrich Muller was advisor to the US president after being head of the Gestapo. MK Ultra say no more.

How  helpless and out of control the government really were, was that UFOs shot down 200 fighter planes attempting to intercept them. This had to be covered up.Via the well known ridicule and distraction in main stream media. It worked for a generation.

Yet today, we have hundreds of  very conservative Launch officers who say their missiles were frequently disabled by UFO's in the Disclosure project. These men don't fantasise and don't think outside the box. They come across as  hard skeptics. When a panel  of them was asked to renounce nuclear war not one would raise a hand to that effect.They were happy to be automatons and kill everybody.And they helpessly watched their nukes being turned off. At least they report it much to their credit, in large numbers.

Example of  a PSY OP

You remember when the US Government tabled in parliament the official government report on 911 ?

Wanna know why ?
The world's first public beheading on the internet occurred. Simultaneously. An horrifying and total distraction from the US parliament. Everybody looking at the middle east.
Brought immediate calls for a bigger crackdown on  the fake terror around the world..
And fake it was. The alleged beheading occurred of a man who was already dead, sat up with eyes closed. No blood whatsoever.  Doctors insisted.
And mysteriously the prisoner was a US  contractor telephone technician who  was working in Abu Graib prison ! He was arrested by the FBI , then 'released' they said, and was immediately kidnapped by  the 'terrorists' Photographed in 'terrorist interrogation' he was sitting in an Abu Graib prison issue chair, in an orange uniform !

The executioner in balaclava turned out to be a British MI6 agent , arrested in Pakistan, many attempts to bring him to trial were thwarted. He spent years in jail.


Is this more gradual disclosure (Q) More funny shaped black ops aircraft protected by public ridicule of UFO sightings.
And you are never safe from PSY OPS coming out of your TV