Admittedly young mens faces change a lot around 21, with pimples appearing and disappearing. Facial hair growth can suddenly accelerate, but eye colour shouldnt change.  Straight hair doesnt become billowy and wavy,  unless it has a long lasting perm, and pink inflammatory skin would be unexpected in a pale faced person unless, perhaps  he has been  recently drugged by  the psychiatrist. Psychotropic drugs have  physical side effects.
Police were notified weeks in advance by the psychiatrist, that she feared something.  But its private so far. The policeman who took the warning has been ordered silent.

Nose profile shouldnt change much on a young mans face. Neither should lip thickness. Neither should eye shape change. Neither should mouth shape. They all seem fundamentally different in the comparison pictures linked. A mole  doesnt normally vanish, they are permanent. Yet a signicant mole on old Holmes left face, near the eye is not on any of the 3 pictures of Holmes in court. Moles just dont vanish.

So what are we expected to conclude ? Another dazed patsy, like Lee Harvey Oswald is in the court? The facial differences are striking. 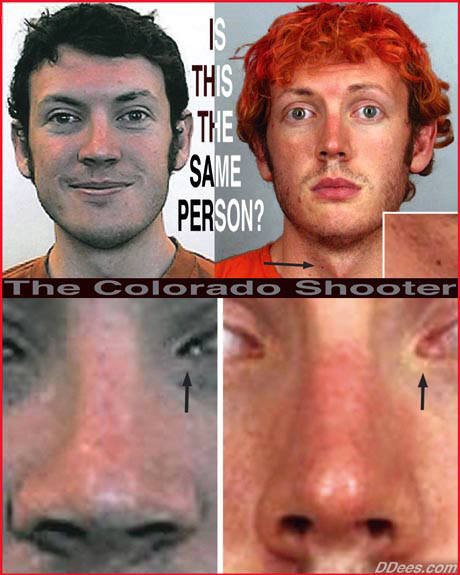