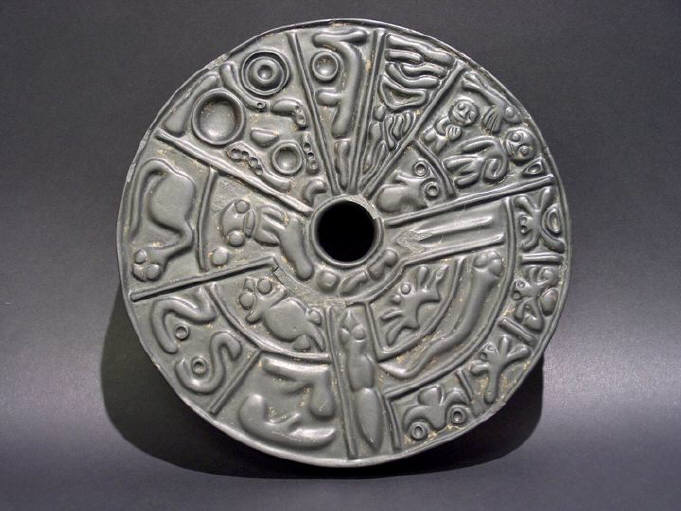 From a Polish mysteries chatline
Name: Lydite is the mineralogicalification of lydia stone (touchstone).
References for Lydite
Reference List: Dana's System of Mineralogy, 6th ed. (1892).
(Lydian stone, touchstone or black jasper) is a smooth, black siliceous mineral. It is employed to test the purity of gold, the amount of alloy being indicated by the colour left on the stone when rubbed by the metal. The touch stone is a smooth fine grained, slightly abrasive black stone, usually quartz or jasper. It was used as the first method of assaying gold and was used at least as early as 500 BC. Touch stones and karat needles are still used today and can be purchased from jewelry supply houses. They obviously are not anywhere near the accuracy of a fire assay, but still serve as a valuable tool to test the karat value of unknown gold items. Steve as an old  jeweller there's a bit more to this- the gold scratch on th stone is then wet with calibrated nitric acid 10K 18 K etc If it disappears it isn't Gold. Same  abrasive stone as used to sharpen chisels. Very hard and wear resistant.It wears everything else. Prone to cracking must  not be dropped. Perhaps it can be chiseled, carved. Would seem a very bad  and odd choice for the above advanced carving exercise.Weight and coldness to one's feel would verify it as stone or plastic. Stone looks more like  jewellery Haematite ( shiny grey magnetic jewellery)
Polish Mysteries Chatline Juicy large still photos of Klaus Donas docco and NASA aliens too
I question the colour match of the above disk on this Google comparison. 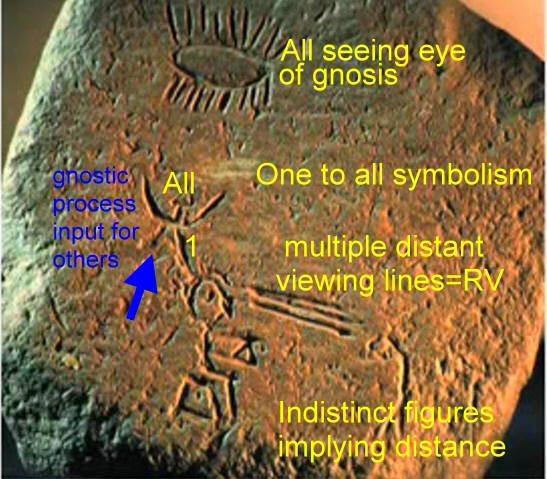 I was nudged by source to put some explanatory notes on the pyramid gnosis diagram from millenia ago in Ecuador.
As a radio electronics technician I found this millenia old diagram of gnosis very appealing.
In computer databases we talk of connections between records as 'one  to many"
The symbolic schematic rock picture shows the normal 'sight'  of  one person being connected  to the all seeing eye of gnosis by the use of a pyramid held in the hands. And possibly some kind  of helmet (sonic resonator?) to aid the process.
Three sight lines imply the viewer has additional vision streams to see many many  extra things, including people normally out of sight , at great distance. This could easily explain how a world map could be chiselled onto a rock in the meditational state of gnosis, sitting in one place. You have heard of automatic writing , typing, now consider automatic rock scratching.
Significantly the map maker symbolised his position on his own world map as an EYE. All seeing ?  Thus Antarctica is easy. It's only sleepwalkers who can't understand this. Somebody got a guided world tour as they were welcomed home, a long time ago.
As I type this I am told helmets and pyramids are no longer necessary. LG is better. A gift from pure affection.