Psychopolitical warfare against YOU by   James Randi, Carl Sagan, Richard Dawkins, Wiseman, Penn and Teller. "Fellows" of CSICOP  and  the pseudoskeptic volunteer  headkicking militia, on the NET.

Paul Kurz recently died
To back up this take on the mendacious  materialistic propaganda of  CSICOP's Paul Kurz, Montague  Keen president of the SPR demolishes Paul  Kurz's lifetime anti-paranormal campaign in a scholarly article that you can download. Psychopolitical warfare it certainly is.
Keen Demolishes Kurz

Corliss Lamont
Psychopolitical warfare against YOU 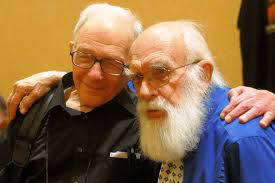 Susan Blackmore Fellow of CSICOP was never  able to find  telepathy in her  own experimental data.Yet others like Chris Carter did. Confirming the  1968 assertion of Gardner Murphy that psychologists are incomeptent at maths and science.  Its why they become psychologists.  Which is mainly talking. Easy. They can't do medicine and  engineering  and law requiring better marks.
To her credit she provided a snapshot of the many  mental deficiencies of pseudoskeptics at CSICOP.  Strangely, all men she said, running from personal experience, running from experimentation preferring to impose their pre-conceived ideas on everybody else (via bullying).

Wiseman, another parapsychologist, fellow of CSICOP, who can't find telepathy in his own experiments.  So how competent is he? In 1999 he actually did  something unusual,  for a skeptic, he actually did a telepathy experiment. Published data  that there was  absolutely no trace of telepathy whatsoever, and Dean Radin, just so casually, came along, and corrected Wiseman's arithmetical "error", and said Bingo ! You have proven Telepathy  after all ! Wiseman has done no experiments since. Stung by his accidental success. That wasn't the idea. Good grief ! Earlier, Wiseman, in theory a qualified parapsychologist was thrown out of a scientific peer review group because he had no interest in science and had "other" motivations which include being a gay rights crusader, and writing books convincing everyone they are deluded, the most common  put down theme of pseudoskeptics.
(Why so many gays in the pseudoskeptic movement ?)

Last but not least, Marcello Truzzi an esteemed public figure  social science commentator, was invited by Stalinist Paul Kurz to be a Founding Father of CSICOP in 1976. Truzzi  first believed that the groups intention was honest. To investigate  paranormal claims, in serious scientific ways. This slowly became an obvious lie, when against Truzzi's protest,  regarding fairness and balance,the committee was stacked with ardent atheistic opponents of the paranormal. This is where Truzzi coined the word pseudo- skeptics  to describe atheistic bullying, intellectual incompetence and dishonesty, of what was now just a propaganda machine to suppress the very thought of the paranormal including religious claims. It was made plain to Truzzi that CSICOP would be run along Stalinist lines and Truzzi would be required to be absolutely obedient to Stalinist orders  from Paul Kurz, the publisher of pornographic books. This completely contradicted the  free spirit of open scientific enquiry espoused initially to him by the Paul Kurz and the misleading groups name, which was complete fraud. Marcello Truzzi felt compelled to resign in protest from CSICOP in 1977. Clue about CSICOP's sadistic political intention hidden in plain sight- YOU are being mocked if you don't realise it means PSYCH OP. An attempt via media to mind rape and headkick YOU into forgetting spiritual and religious impulses to make you susceptible to Stalinism as a political alternative. Stalin's Gulag was one third of the population dead or jailed 66 Mill.Thats the alternative planned for you by Corliss Lamont owner operator of CSICOP (PSYCH OP) and James Randi and Richard Dawkins. Sound worse than Pol Pot ?
Oddly, Marcello Truzzi's description of pseudoskeptics is a large entry in Wiki. He is allowed there to disparage the skeptic movement. Irony being skeptics control and maintain Wiki entries. it gets worse. Susan Blackmore  CSICOP fellow, describes their psychological profiles  as  all men, dysfunctional men, with an aversion to personal experience and experimentation, and their chief conduct was bullying, imposing their views on others regardless of reality. There is good evidence this is mild autism 4 times more common in men due to lack of vitamin D in their mothers during pregnancy.  You have never met a friendly kind  skeptic. That is a clue. And they all manifest learrning disabilities.
You can type pseudoskeptic into wiki and see that large entry allowed, mysteriously.
Pseudoskeptics Internet Footsoldiers Autism linked to Vit D